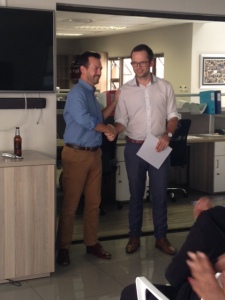 To Esmeralda Lottering for passing APC SAICA Board exam 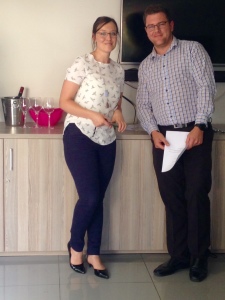 Sports & Social Club threw a party for Esmeralda and Dean on Friday 9 March. 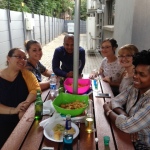 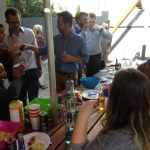 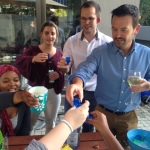 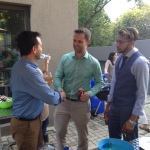 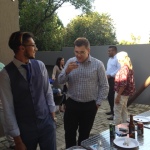 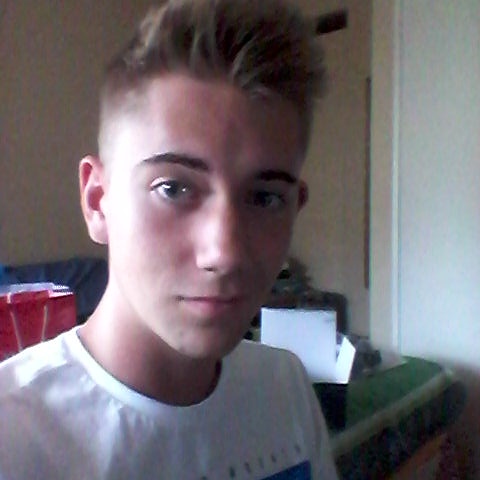 We bid farewell to Shene Miller, we wish her the best in her future endeavours.

Following President Ramaphosa’s State of the Nation Address theme of hope and renewal, Gigaba placed key emphasis on the risks that have been a centre of concern for the South African economy.

These are the tax proposals as noted in the 2018 budget speech:

VAT has increased from 14% to 15% and will take effect from 1 April 2018. This increase will affect 80% of higher income earners. Zero-rated food, such as brown bread, will remain VAT-free.

The personal income tax of those earning between R0 – R555 600 per annum will remain unchanged, while those who earn more than R555 601 per annum will be affected by a 3.1% increase. Primary, secondary and tertiary rebates are partially increased for inflation.

The Estate Duty rate has increased by 5% on dutiable estates in excess of R30 million. The same percentage increase is applicable on donations of more than R30 million. 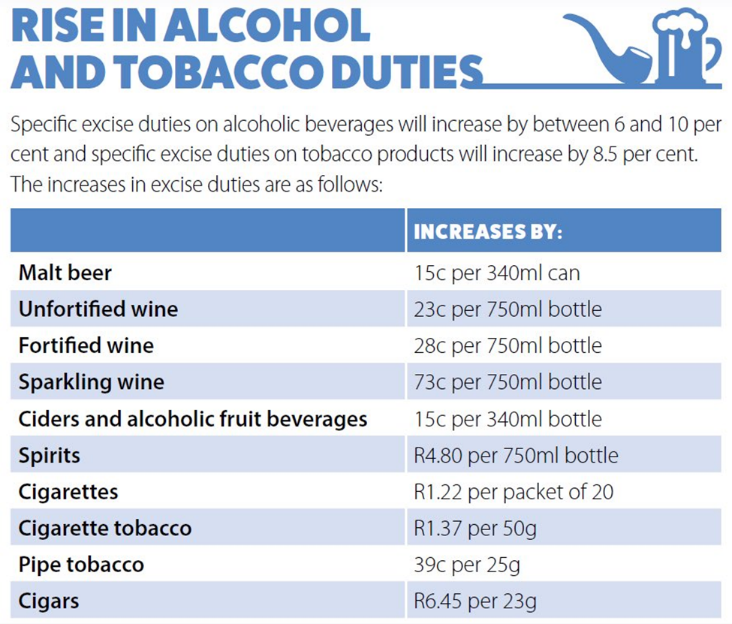 Due to take effect as of 1 April 2018, the maximum ad valorem excise duty for motor vehicles and luxury goods will increase from 7% to 9%.

Lower income households will be financially relieved through an increase in social grants. The grant increases, which will be effective as of 1 April 2018, are as follows:

On 1 October 2018, these grants will increase by a further R10, taking the disability, care dependency and old age grants to R1 700, and the child support grant to R410.

The Department of Environmental Affairs is due to publish a policy regarding the scope of environmental reform. Levy on plastic bags, vehicle emissions tax and the levy on light bulbs will be raised to promote eco-friendly choices.

These have remained unchanged at 28% and 20% respectively.

The letting of residential property is typically exempt from VAT. Due to a change in use of the properties therefore (albeit temporarily) from being held for sale as trading stock to now being put up to be let in the interim while being on market constituted a change in use of the properties. Due to the change in use of the properties, from being used to make taxable VAT supplies in the ordinary course of business and being sold as trading stock by the developer, to now being used to make VAT exempt supplies in the form of being used to generate residential rental income, the provisions of section 18(1) of the VAT Act would ordinarily have applied. In terms of section 18(1), where goods have been acquired previously for purposes of making VATable supplies, and these goods are subsequently used to make exempt supplies, the VAT vendor must be deemed to have disposed of all those assets for VAT purposes. In other words, even though no actual disposal of assets has taken place, such a disposal is deemed to take place for VAT purposes and which gives rise to output VAT having to be accounted and paid for by the developer based on the open market value of the property at that stage.[2]

As one could quite easily imagine, having to account for output VAT in these circumstances may be prohibitive, especially considering that the value of a property will likely have been enhanced due to the development and that VAT inputs thus far claimed by the developer would be overshadowed by the output VAT amount that is now required to be claimed.

It is in acknowledgement hereof that section 18B was introduced to the VAT Act in 2012. In terms of that provision, property developers were granted a 36-month grace period within which to sell properties, and during which time these residential properties could be rented out without a deemed supply being triggered for VAT purposes.

When introduced originally, it was made clear at that stage that the relief for temporary letting as explained above will only be in effect until 1 January 2018. However, it is arguable that the property market has not recovered sufficiently yet for the relief to be withdrawn at this stage.

A recent judgment of the Tax Court sitting in Pretoria[1] highlighted yet again the very broad nature of the employment fringe benefit regime governed by the Seventh Schedule of the Income Tax Act[2] and as applies to goods and services provided to employees through an employer. As a general principle, employees’ benefits received from their employers in whatever form could potentially be treated as part of employees’ remuneration and therefore subject to income tax in their hands. Such fringe benefits are therefore also subject to the PAYE regime and which should be applied by employers in withholding PAYE on the value of such benefits.

Paragraph (i) to the “gross income” definition in section 1 of the Income Tax Act specifically includes in gross income “… the cash equivalent, as determined under the provisions of the Seventh Schedule, of the value during the year of assessment of any benefit or advantage granted in respect of employment or to the holder of any office, being a taxable benefit as defined in the said Schedule…”.

In order to implement this complex “Tax Equalisation Scheme”, the South African employer company contracted the services of a firm of tax consultants to assist the non-resident employees to submit their tax returns in accordance with the South African income tax laws, and also to ensure that the returns reflect the correct information to give effect to the “Tax Equalisation Scheme”.

The Tax Court found that the services which the tax consultants provided, although arguably necessary for purposes of fulfilment of the employer’s contractual arrangement towards its employees, were in essence a service rendered to the employees and not the employer, even though the tax consultants’ services were paid for and contracted by the employer. As a result, these services constituted a “benefit or advantage” for the employees as envisaged in the gross income definition quoted above, and moreover such services were provided for the “private or domestic purposes” of the employees in question.[3] As a result, the appeal against the PAYE assessment raised by SARS in the amount of R2.4m was dismissed.

Although a fact-specific judgment, it nevertheless again highlights the very broad nature potentially of the PAYE regime. Given the heavy penalties and other sanctions linked to a contravention of the provisions of the Fourth Schedule (which governs the collection and payment of PAYE, which may also be levied on fringe benefits received by employees), employers are advised to approach the tax consequences of employee benefits with caution.